You are here: Home / Blog

Who says accountants aren’t athletic? The 9 athletes on this list will prove them wrong! Before their athletic careers, each of these 9 famous athletes studied accounting and some even went on to work as accountants.

Craig did admit that if he wasn’t playing baseball, he wouldn’t have been an accountant. He was quoted as saying “If I weren’t a professional athlete, I’d have gone to law school and become some kind of lawyer. I wouldn’t be an accountant, I know that.”

2. Ray Wersching, NFL Kicker
Ray Wersching, a graduate of University of California Berkeley, was signed to the San Diego Chargers before eventually joining the San Francisco 49ers for the duration of his career. When he retired, Wersching held 49ers records for points, field goals and extra points.  While playing football, he worked as a certified public accountant in the off-season.

3. D’Lo Brown, Professional Wrestler
D’Lo Brown, an ex-professional wrestler and current TNA Wrestling road agent, also happens to be a CPA. Interestingly, the WWF muscleman was working as an accountant before he began his career as Ace the Animal, during which he simultaneously held the European and Intercontinental Championship belts.

One of the most surprising athletes on this list is MMA/UFC fighter Chuck Liddell. Liddell is a former UFC Light-Heavyweight Champion with such impressive fighting skills that he’s credited with helping make MMA a mainstream sport.

Liddell graduated from California Polytechnic University with a BA in Business and Accounting in 1995. The former fighting champion certainly challenges any notion that accountants can’t be men (or women) of action. 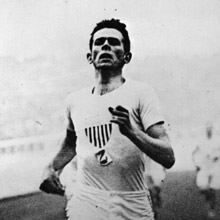 Another olympic athlete, Edwin “Teddy” Flack, was trained as an accountant with the firm Price, Waterhouse & Co (now PricewaterhouseCoopers).

There he joined the London Athletic Club, eventually becoming Australia’s first Olympian, being its only representative in 1896, and the first Olympic champion in the 800 metres and the 1500 metres running events.

6. Alexandre Bilodeau, Olympic Skier, Canada
Alex Bilodeau, the winner of a gold medal in the men’s moguls at the 2010 Winter Olympics, defended his gold in 2014, becoming the first Canadian male to do so.

Bilodeau is currently an accounting student at the John Molson School of Business at Concordia University. He has since retired from freestyle skiing professionally and plans to become an accountant once he’s done school.

Juan Manuel Márquez currently holds the WBO light-welterweight champ and is the first Mexican-born boxer to become a world champion in four divisions. He also happens to have an accounting degree.

8. Filipo Inzaghi, Italian Football Player
Filipo Inzaghi is one of the most prolific goalscorers of all time in European club competitions. Since retiring he is now the head coach for Milan, however before his football career took off, he got his accounting degree at the insistence of his parents.

Pádraig P. Harrington, an Irish professional golfer who plays on the European Tour and the PGA Tour, has won three major championships: The Open Championship in 2007 and 2008 and the PGA Championship, also in 2008. Before his success in the PGA, he passed his final accounting exams in 1994 and gained admittance into the ACCA.

As summer winds down and everyone starts bracing themselves for another tax season, we’ve got a way to keep things fun in your firm... prepare yourself for the top 77 best accounting jokes. Warning: this list contains 7 very NERDY jokes. Do not … END_OF_DOCUMENT_TOKEN_TO_BE_REPLACED

Your firm is more than a workplace. It’s where you dedicate your time and resources to further not just your career, but also those of your colleagues. Together, you form a team that builds a name and reputation for the firm. The strength of your … END_OF_DOCUMENT_TOKEN_TO_BE_REPLACED

We all know that customers love a deal. In fact, some people live to coupon. Discount hunters are almost always on the prowl. You want more business. You want to attract new customers. How do you do it? If you’re thinking about running a promotional … END_OF_DOCUMENT_TOKEN_TO_BE_REPLACED

If you’re starting a new firm or simply trying to build you’re firm’s online presence, you’ve likely heard one word a million times: credibility. Credibility is about experience. What can you do if you don’t have much experience or feel like the … END_OF_DOCUMENT_TOKEN_TO_BE_REPLACED

“You’re going to charge me how much? Can’t you cut me a deal? I’d be willing to hire you if you’d drop your price to...” Sound familiar? When someone tries to haggle down your rates, it’s likely you’ll hear them say something similar. One of the … END_OF_DOCUMENT_TOKEN_TO_BE_REPLACED

We all do it. Procrastination is part of human nature. Even the very best accountants have days where they delay tackling the work that must inevitably be completed. If you’ve ever felt like procrastination is a chronic illness you can’t shake, then … END_OF_DOCUMENT_TOKEN_TO_BE_REPLACED

Small businesses that are operating as “flow-through entities” are becoming increasingly common. We see a lot of compensation issues arising from these types of businesses. When such a company comes to you for accounting services, what best practices … END_OF_DOCUMENT_TOKEN_TO_BE_REPLACED

One of the most difficult aspects of business for any professional is getting paid what they’re worth. All too often, we see clients and potential customers who expect to get something for nothing, especially when it comes to the services we … END_OF_DOCUMENT_TOKEN_TO_BE_REPLACED

Fundamentals are base or core rules or principles. They are of central importance, especially in the accounting industry, because without them you risk losing focus and making mistakes that could hurt your firm. There are three accounting … END_OF_DOCUMENT_TOKEN_TO_BE_REPLACED